Hello and happy new year to all of you!! I have already felt the good vibes this 2015 is bringing :) and can see a great year ahead! Hoping the holidays have been great, for all those like me who celebrate the 6 of january too there are still plenty of holidays left hahaha.
We tend to over indulge this time of the year and it is perfectly ok if we know how to balance it and how to get rid of the possible harm we have done to us internally. No need to freak out but year after year our bodies are still ours to take care of as they are the ones we have for as long as we live.
Cakes, sodas, alcohol, little exercise and water.....sounds familiar?! I know what it is like as I too have a sweet tooth and love social life and eating out.
Do not worry if you are a bit out of shape or feeling bloated. I am going to give you 9 tips to incorporate in your days from now on and within a month you will feel as good as new :)

1. Drink water, plenty of it

After the holidays we may feel bloated or unable to properly digest. By eating out we intake a lot ore salt in our food than we are used to, we eat more sweets than normal and drink all sorts of fluids but not as much water as we need. Our bodies get dehydrated and as a result bloat and make us going to the toilet not an easy task.
Try getting back on track if you already used to drink water and if you didn't try these simple steps
2 glasses after waking up - helps activate internal organs
1 glass 30 minutes before each meal - aids digestion
1 glass before taking a shower - helps lower blood pressure
1 glass before bed time - aids in circulation
3 more glasses throughout the day anytime you feel like it - relieves fatigue, satiates, makes your skin glow....

If you feel it is hard to drink plain water spice it up by adding cinnamon and apple to it, some berries, some lemon or oranges and you will immediately love the taste!!

During the holidays we tend to skip our routines and tend to stay at home or cozy on the sofa. We take cars and cabs from one place to another and barely walk or work out. To those of you who kept it up over the holidays, hats off!!! To those who didn't it is no problem....slowly start with a yoga practice or some swimming and try being active at least 30 minutes a day and gradually step it up until you do an hour a day with one rest day a week. You will feel better as endorphins get released whilst exercising and as you shape up your smile will become wider and your confidence will grow even higher!

3. Pace your meals and reduce back the portions

The amount of food we eat during  holidays tends to be bigger than usual as we are normally out, eating at friends places or restaurants or doing buffets. Our stomachs are a muscle that expands or contracts depending on how much intake there is daily. The bigger it gets the more food it will want in order to feel satiated. Remember it takes 20 minutes to feel full as the chemical signs that tell your brain it is time to stop eating need some time to get that message from your stomach and pass it on. You would want to start pacing your meals again and allowing at lest three hours in between. Try reducing portions by using a smaller plate when eating. Whenever craving comes your way drink water or eat an apple. As the saying goes "If you are hungry and dont want to eat an apple means you are not hungry to begin with" hehe

4. Green up your plate

As we have previously learned greens are crucial in our diets. They provide us with live enzymes, phytonutrients and minerals our bodies love and need in order to function happily. We all know they are not a major holiday food therefore it becomes our duty to bring them back into our lives. Call it your yearly resolution, yourself getting back into own habits or a healthier way to be, whatever you choose go for greens! Try eating a small salad before meals and eventually make a big one for dinner and make it the meal.
Combine different greens or make it a daily green smoothie routine. All the fiber kept in them will kick start your digestion and get rid of your bloating once and for all.

5. Become that chef you always wanted

During the holiday season we all tend to eat out and if eating at home we make those recipes we call the cheating ones. Butter, salt, dairy and sugar become stars of the kitchen and it's ok for a few weeks but the deteriorating health benefits they have on us long term are reason enough for us to not use them after the holidays end.
Go back to home cooking, prepare a weeks meal on saturday and freeze or store them in air tight sealed containers in the fridge. Enjoy your grocery shopping. Get over familiar with the produce section and make your fridge look fresh and colorful full of fruits and veggies.
Change the salt for spices and herbs or lemon and lime
Change the butter for ghee or sesame oil
Slowly get rid of the sugar and swap over to malt syrup, raw honey or stevia
Go back to whole grain
Bake with coconut flour, spelt or quinoa flours.
Get back in the kitchen and become a ratatouille master chef!!!

6. Create a motivational collage or start writing a journal

A part of getting back in shape doesn't always mean physically but also mentally. Our brains empower us and keep us positive minded. We need to feed them success stories, hopes and dreams, goals and plans. A new year can be challenging in good or bad ways depending on life backgrounds and surrounding. It is never too late to make changes in life and the best way to start is by visualizing. You can choose to write a daily journal expressing your feeling and hopes or make a collage showing what you would love to achieve or become. When doing this our brains instantly become empowered and receive a boost of positive energy, when we have many ideas rolling around it's the mix of all of them that make the greatest one.
Never underestimate the power of happiness as it relies only inside of you. Money has no value as an object, people have the value.

7. Chew and slooooooow down

Has it happened these past days that you would eat faster or smaller bites over and over without actually realizing as you were caught up in the best conversation ever? hahaha When we eat larger portions and eat them faster we only make our stomachs bigger exceeding also the time it takes our brain to signal we are full. This leads to indigestion, heart burn or tummy aches. You would want to start slowing down again and properly chewing your food. Seems maybe crazy but counting always helps. Count your chews a minimum of 20 times per mouthfull and even if drinking a smoothie try swirling it around your mouth for a bit.

As mentioned before, a good mental state is crucial for getting back on track or becoming that healthier person you want to be this year. Music is and has always been and inspiration, a motivation, a therapy,  what brings back memories, feelings and even smells. You would want to make a playlist of the best and most motivating songs upon your favorites and start playing it in the morning when sipping your coffee or taking a shower. Music is fireworks of happiness in your brain and it travels all around you lighting up every inch of yourself.
One of music’s energizing effects comes from its ability to engage the body’s sympathetic nervous system. The activation of this system readies the body for action whenever we face a challenge in our environment. Airways open, the heart rate accelerates, and muscles are primed to move. Auditory signals – abrupt sounds or those that suddenly increase in frequency or volume – trigger alerting responses and increase physiological arousal.

Remember from lasts posts what we learned things regarding these two powerful roots. They are and have been for many years healing foods and therefore can help us get rid of accumulated toxins and start a healing post-holiday process.
Add ginger to your meals by chopping up a couple inches of it and stirring it into our soups, sauces and stir-fries.
Drink a cup of warm water with a slice of ginger and some turmeric powder in the mornings or make yourself a warm cup of milk at night with some ginger flakes and cinnamon.
Incorporate turmeric either fresh or in powder form in your soups, it gives a yummy nutty flavor.
You can also add an inch or two of fresh ginger into your juices, you will love the after taste!

Remember ginger is available year round in the produce section of your market and is in a root form. It has a long tradition of being very effective in alleviating symptoms of gastrointestinal distress. In herbal medicine, ginger has been proven to promote the elimination of intestinal gas and to relax and sooth the intestinal tract. Modern scientific research has revealed that ginger possesses numerous therapeutic properties including antioxidant effects, an ability to inhibit the formation of inflammatory compounds, to improve the absorption and assimilation of essential nutrients in the body, to help overcome nausea...and so many more.
Turmeric or curcumin as u might have heard it mention, also comes in a root form from the curcuma and you will find it in the produce section of your supermarket too. If it is fresh be careful not to color your hands yellow!! use gloves when handling it!! Ayurvedic and Chinese medicine looove turmeric and I personally do to...it's benefits are endless. It has a peppery, bitter flavor and bonds magically with all curries. It is a huge anti-inflammatory agent helping people suffering from IBS or rheumatoid arthritis, improves liver function, lowers cholesterol.....inhibits cancer cell growth and metastases.... and so many more.

Let's make this year an amazing and healthy one :) 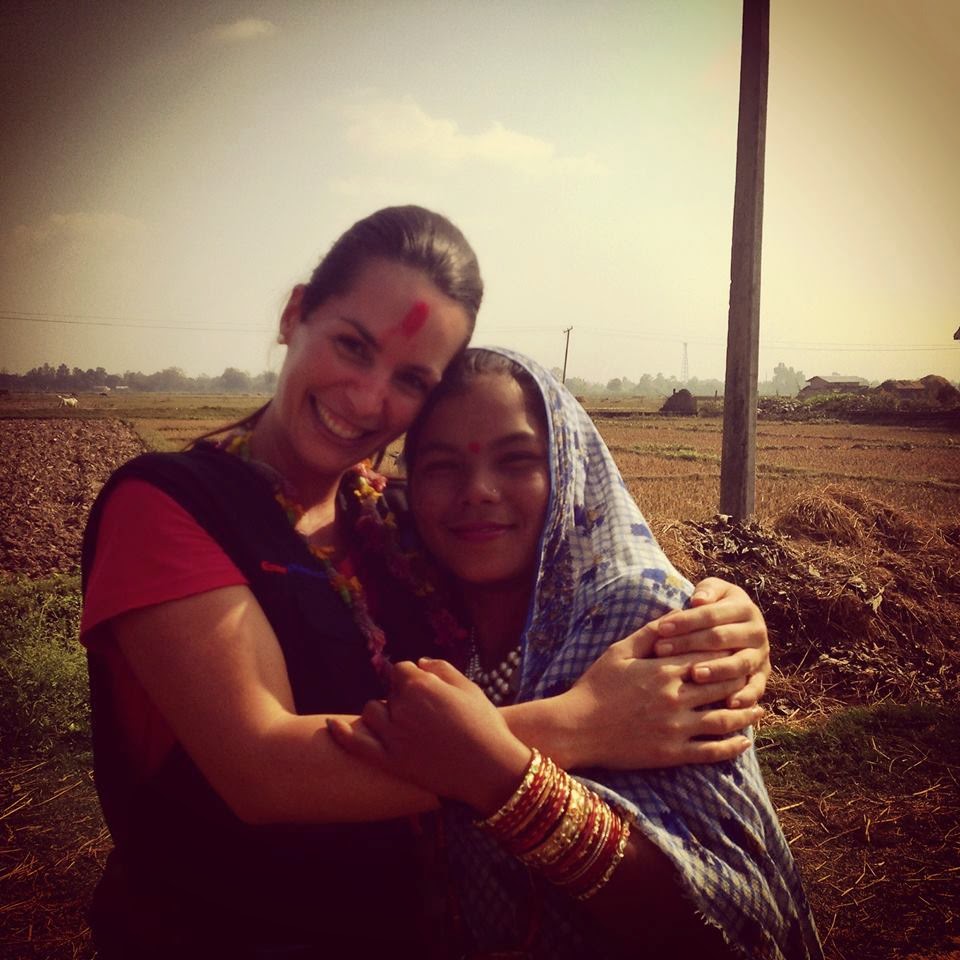 Posted by Rocio Arenas ..... becoming a healthier you! :) at 05:12 No comments:
Email ThisBlogThis!Share to TwitterShare to FacebookShare to Pinterest
Older Posts Home
Subscribe to: Posts (Atom)

Blog Archive. Posts in english and in Spanish :)